X-rays were taken and there was the strong suspicion of a bone cancer affecting the left pelvis. This suspicion was confirmed by biopsy. No spread to the chest was apparent on chest X-rays, but these tumours are notoriously aggressive.

Hemipelvectomy, removing the hind limb with part of the pelvis including the tumour, was the only other treatment option. Only a handful of these procedures had been carried out in the UK for osteosarcoma before. The client’s insurance budget would not stretch to referral onwards to a specialist centre with advanced imaging facilities and first-hand experience of this procedure. The ethics of such aggressive surgery were pondered. Specialists at Willows Referral Service and at Davies Veterinary Specialists gave helpful advice during surgical planning.  A hemipelvectomy procedure was performed and went very smoothly. Serious pain relief was provided with an epidural, local anaesthetic nerve blocks, methadone, ketamine and anti-inflammatory drugs

She recovered well and was eating and walking within a few hours. We discharged her on oral medications, already scampering about very happily. The tissue removed was examined by a pathologist who confirmed that the primary tumour had been fully removed. Cycles of chemotherapy with carboplatin started two weeks later under the control of medical colleagues to try to clobber any secondaries that were taking route elsewhere in her body.

This surgery was taken on with some initial doubt as to whether it was the right thing to do. However no secondaries have appeared over 6 years after surgery and it appears that we have achieved a cure.

The owner gives periodic updates on her progress and we saw another of their dogs a couple of years ago – just for a nice routine cruciate surgery thank goodness! 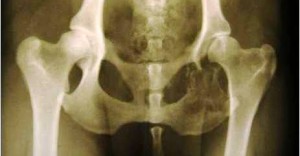 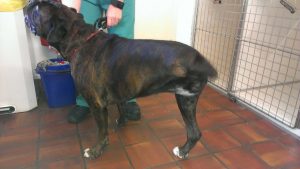 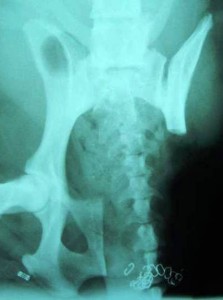