Maxillectomy for an osteosarcoma

A 10 year old Labrador retriever presented with a bone cancer involving the bone of the upper jaw at the back of the mouth.

It had been biopsied at the time of a routine dental. Although the biopsy had suggested that the tumour was benign, it was substantial in size. The owner was offered advanced imaging with a CT scan. The owner was in fact a human CT scanner operator, but they requested removal of the mass as effectively as possible, and they accepted that there was risk that some tumour might be left behind. A large piece of the skull was removed, and this meant removing the floor off the nose cavity and the roof of the mouth in the area around the tumour. The hole that was left was closed with tissue from the lip. A feeding tube was then placed through the body wall into the stomach to allow food to bypass the repair while the roof of the mouth healed. This feeding tube was placed via the oesophagus without actually opening the abdomen, using a special device.

Laboratory examination of the tissue that had been removed confirmed that we had achieved complete excision of the mass, but revealed that the tumour was in fact an osteosarcoma and was malignant in nature. No sign of spread was detectable but post-operative chemotherapy was advised. 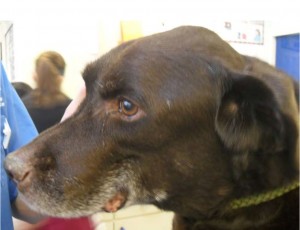