Hepatic lobectomy with a surgical stapler

Gemma, a 7 year old Border collie, presented with a history of removal of the spleen in the previous year at the referring practice, and now had had a solitary large hepatic mass observed on an ultrasound scan.

We were asked to attempt removal of the mass. We located the mass through a mid-line abdominal incision. It was large, about 10cm diameter and located deep in one of the left lobes of the liver. We had clipped Gemma widely to allow for extension of the abdominal wound along the rib margin and this proved necessary to gain enough access to the base of the affected lobe of the liver. We removed the liver lobe containing the mass using a TA surgical stapler. The deep margin, while as “deep” as we could possibly get it, was thought to be incomplete (ie some tumour tissue was left behind in situ). The mass was sent to an external laboratory and was found to be a cholangioma. As feared, the deep margin was not “complete” . While this mass was not malignant, local recurrence might well lead to future problems.

But for now, Gemma is happy and recovered very well from surgery. 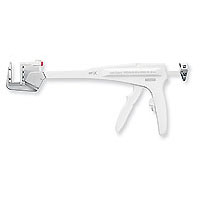 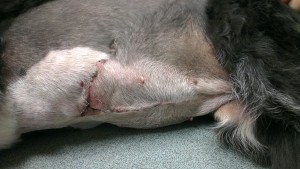