Max, an elderly spaniel was referred with straining to defaecate. The referring vet had identified a mass affecting the right side of the anus, and increased thirst and urination. Blood tests had identified increased calcium levels.

Max was a few kilos over his ideal weight and while this didn’t make it easier to feel the abdominal lymph nodes, the extra fat around the lymph nodes did make them show up better on X-rays!

The primary tumour was removed from the anus and the subsequent pathology report confirmed that this was completely removed. In addition we opened Max’s abdomen to one side of his penis and removed the large sub-lumbar lymph nodes. These were about 4cm x 6cm and were nestling in the angle where the aorta (the main artery in the body) divides into the left and right iliac arteries. Although this is something of a “scary place to be” surgically,  the enlarged nodes came away very nicely and this part of the procedure only took about 20 minutes.

The prognosis is pretty good considering that we are dealing with a malignant tumour here. A reasonable expectation of survival after this surgery is given by the MST, the “median survival time”, and this is something in the region of 18 months for this tumour type. Recurrence at the anus is unlikely, but recurrence in the sub-lumbar region is likely to eventually occur and this recurrence is likely precede spread to other distant sites in the body like the lungs.

To delay the recurrence of the tumour, we have followed up the surgery with chemotherapy. We use the services of a specialist medical oncologist, Iain Grant at Chemopet (www.chemopet.co.uk). Iain reviews case notes and laboratory reports and provides us with detailed bespoke advice on the ongoing case management. He also supplies any chemotherapy agent required which is great for all sorts of reasons:

* These are “serious drugs”, and they need careful preparation, storage and handling

* They are often less familiar to veterinary practitioners than more commonly used drugs, and the support of a specialist is reassuring to all

In this case Max was put onto a course of a chemotherapeutic drug called cyclophoshamide. This is given in long term “metronomic fashion” which means regular smaller doses rather than individual “big-hit” doses. The cost per day is no more than the price of a pint. Most people are anxious about the use of chemotherapy in their pets which is very understandable given the horror stories that most of us have heard over the years relating to chemotherapy in people. However animals generally take chemotherapy in their stride and complications seem much less common with veterinary chemotherapy. Max certainly seems very happy with his medication!

This is a nice example of teamwork between an owner, a referring practice, ourselves as a surgical practice and Chemopet as a specialist oncology service. Periodic blood tests will keep an eye on calcium levels, which may be the first clue that regrowth is occurring with renewed production of the aberrant hormone.

Oh yes, and finally, the owner is working hard to get some weight off Max!! 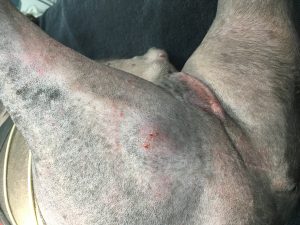