We get alot of long bone fractures referred to us, and this case history of a tibial fracture in a middle aged greyhound illustrates the sorts of things we need to think about and address when managing these cases.

An 8 year old greyhound broke her tibia (the shin bone that is found below the knee joint) during vigorous play in the garden. The dog was not that young, and there was no major trauma involved like a car of a fall off a cliff so we checked carefully for underlying problems like a bone tumour. We did this means of radiographs of the fracture site and of the chest. Bone tumours weaken bone which can then fracture at the site of the tumour. Bone tumours commonly spread to the lungs, hence the chest x-rays. These x-rays were taken under general anaesthetic with careful positioning, inflation of the lungs and multiple views to increase the likelihood of spotting any spread. We were relieved to find no evidence for such an underlying problem.

There is not much soft tissue between the skin and the tibia, so tibial fractures are often open fractures, which means that bone is exposed, or has been exposed, to the outside world through breaks in the skin.  The fracture was fortunately closed in this case which is a good thing as surgery and the implantation of metal into a contaminated environment would carry great risk of infection.

Careful examination of the radiographs revealed a crack spreading below the main fracture. These cracks are pitfalls awaiting the unwary, as they can split apart if metalwork is placed through them. Tight wire loops were used to prevent this from happening. A pin was inserted down the centre of the bone to keep the bone aligned and straight. A locking plate was then attached to the side of the tibia. Locking plates, used for years in people, have really found favour in the veterinary world in recent years. It is not essential for the plate to be in direct contact with the bone like it is for conventional bone plates. The principal is that the screws tighten into the plate as well as into the bone and this makes for a very rigid and robust means of fixation. Great care had to be taken to avoid damage to the tibio-talar (ankle) joint with drills and screws.

Wounds healed very well and four weeks after surgery we were able to confirm that the bone was healing well using a hand-held x-ray generator which meant that she could be x-rays standing and without sedation while the owner waited for a few minutes.

We heard from the referring vet recently that she is using the leg very well, exercising normally and there is no discernible lameness. The implants have done their job but we will only remove them if they ever become an issue to the patient. 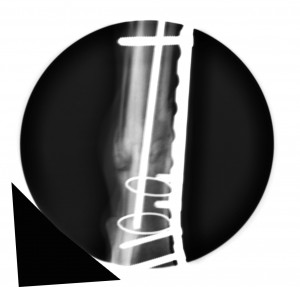 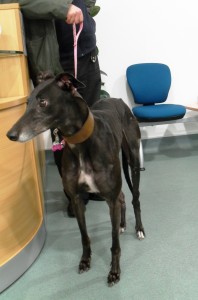