A 7 year old female Jack Russell terrier, who lives on a farm and loves nothing more than to catch rats, was riding on the front seat of a car when it was involved in a road traffic accident.

She broke her neck after colliding with the windscreen, a fraction of a second after her owner did! She presented at midnight, unable to stand and in extreme pain. She was anaesthetised without delay for fracture stabilisation with pins placed into her top two vertebrae. Antibiotic-impregnated bone cement was packed around the pins to complete the fixation. She recovered well from anaesthesia and she was much more comfortable than preoperatively. She was walking, albeit unsteadily, within a few hours. At suture removal, a week or so after the trauma, she was trotting around happily. She made a full recovery but it will be no more ratting for a while her bone healing completes! 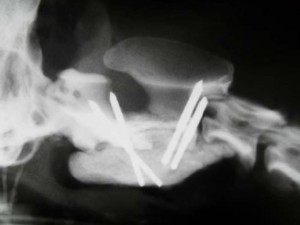 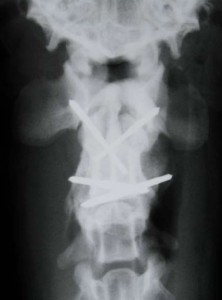