Fracture of the lumbar spine in a dog

A 5 year old female Labrador retriever presented “off her back legs” after a road traffic accident.

She had sustained a broken back and a collapsed intervertebral disc space. She could still feel her feet but she was in severe pain and her nerve damage was progressing. She had surgery through the evening to stabilise her back. Screws were placed into the vertebrae adjacent to the injury. The screws gripped the bone and the heads and a length of thread were left proud of the bone. Extreme care was required to avoid the spinal cord and to avoid the main artery that lies just under the spinal column, right in the line of fire of the drill. Antibiotic-impregnated bone cement was packed around the screws to complete the fixation. Attentive nursing care was required post-operatively. She was able to urinate on her own within a couple of days and she was able to walk haltingly five days post-operatively. She was discharged into the owner’s care 7 days post-operatively and she went on to make a full recovery. 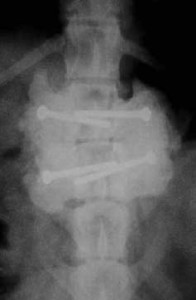