A 9kg, Sealyham Terrier presented with acute paraplegia (paralysis of the hind limbs). The condition was painful, and there was still enough nerve connection between drain and feet to allow some response when the toes were pinched.

Tail and hind limb reflexes were intact. Hind limb muscle tone was increased. Neurological signs localised to between T3-L3 and graded as 4/5. Surgery was indicated.

We suspected that an intervertebral disc had extruded into the vertebral canal. We managed to accurately localise this mineralised disc extrusion using simply CT and without myelography, so there were no extra risk issues incurred.

(Myelography involves injecting contrast agent around the spinal cord – this cord is already very “unhappy”, and it won’t be any happier by being put under any more pressure!!).

The problem was on the right side at T13-L1.

A hemilaminectomy was performed, which involves burring a window in the bone of the spinal column to allow the extruded disc material to be was removed to decompress the cord. 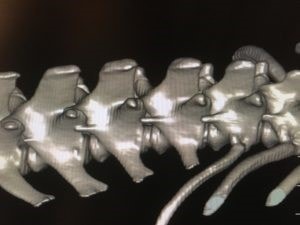 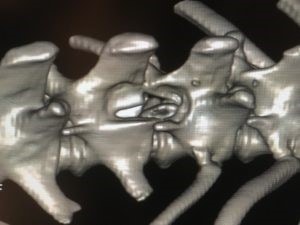