Collateral ligament injury in the hock

Roxy, and enthusiastic 34kg 8 month old Labrador bitch, presented with hind limb lameness associated with instability of the medial collateral tibio-talar ligament, (the ligaments that run down the inside of the ankle). Ligaments exist to prevent motion of joints in directions that is not desirable – in this case, preventing side to side motion of the hock.

So three screws, two washers and two loops of wire were placed with the aid of intra-operative radiography to stabilise the joint. The wire will likely ultimately break through metal fatigue. Some surgeons use braided nylon for prosthetic ligaments but we find the sepsis (infection) that these are associated with unacceptable. In addition they can easily fail through fraying on metal implants, and it is harder to tighten them correctly than it is with a wire twist knot.

Roxy will have splint support of her ankle for a few weeks and then the proof of the pudding will be in the eating!

We may yet nee to fuse this joint with an arthrodesis (see separate article), but we decided to try salvaging joint function first in this young dog. 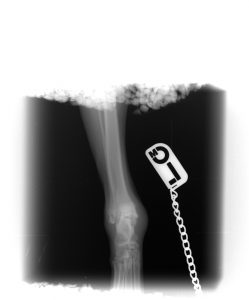 Pre-op; soft tissue swelling is visible over the medial (inside) of the ankle, which is on the right of this picture, on the same side as the metallic marker