These were diagnosed by appreciating the abnormal movements in the stifle during manipulation. The patella (knee cap) was unstable and tended to fall medially (inwards) out of the groove on the femur within which it should run. The tibia (shin bone) could be made to shear forwards with respect to the femur (thigh bone).

On the pre-op xray, the femur (thigh bone) could be seen to be shifted caudally (backwards) with respect to the tibia (shin bone) because of the cruciate ligament instability.

The patella was addressed with the standard tibial crest translocation, stabilised with two pins and a tension wire. This covered in another article on this web site. The cruciate ligament instability was addressed with the placement of a permanent suture (that doesn’t show on the xray), secured with a crimp (which does show up as the diagonal rectangle of metal). 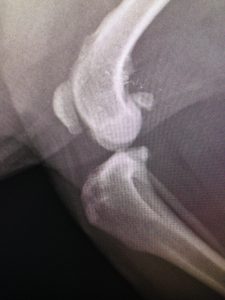 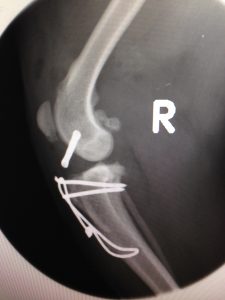