Jagger was a 3 year old, 65kg, gentle giant of a Mastiff. When his cruciate ligament ruptured in his left stifle (knee) joint, he needed surgery which was done at West Midlands Referrals.

Andy treated this with a closing wedge tibial osteotomy procedure. He was discharged as normal, but a few days later he was unable to get up, and it became apparent that he had now ruptured the same ligament in the other stifle joint. Matteo did a similar procedure to Andy on the right tibia and debrided (trimmed) one of the right side menisci (cartilaginous structures that sit in the joint between the femur and the tibia) as this was torn.

Jagger was helped up to his feet once he was awake. He was a large dog and it is important that large dogs don’t remain recumbent for long as bed sores are a real risk if they do. He was able to self support for short periods once he was up. We started laser therapy and Sonivet ultrasound therapy on both surgical sites to promote early bone union.

He will stay with us until the owners are able to cope with him at home. The long term prognosis is still good, but he will have a difficult few weeks ahead of him  until the bone healing in the two sites is well underway. 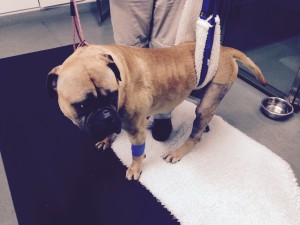 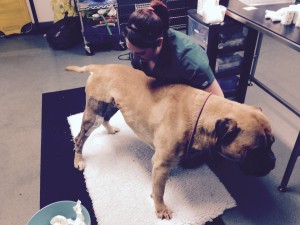 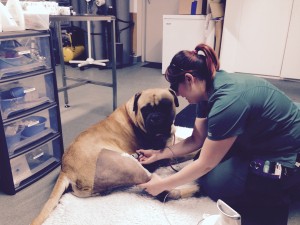