Louis, a Spinone, was unlucky enough to get an osteosarcoma aggressive bone tumour in a hind limb in 2012. He had a hind limb amputation with us, and his likely survival time with this and chemotherapy was about a year. There is an information sheet on osteosarcoma on this website under the section for owners (and the one for vets), in the subsection of “fact sheets”.

Louis did really well and was still going strong in 2015 with no sign of recurrence of the cancer evident.

Unfortunately he then ruptured his cranial cruciate ligament, and he was struggling to walk. So his owner brought him back for an osteotomy (bone cutting) technique to help him cope with this rupture. He needed a robust fixation of the osteotomy with plates, and a bit of careful support for the first few days until he was able to get up on his own. 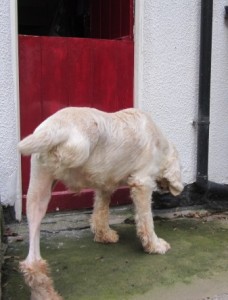 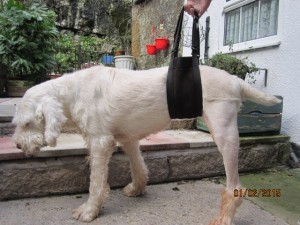