The use of locking plates has exploded within the orthopaedic community in the UK  in recent years. They have revolutionised the way some injuries are treated. Fusing (“arthrodesing”) shoulder joints used to be a difficult procedure, not because the dogs found a fused shoulder hard to use, but because bending a conventional bone plate to fit the contours of the shoulder was a challenge and a half.

We have done a number of these shoulder arthrodesis cases now, successfully using the SOP locking plate system to give these dogs back near normal forelimb use. A few of these cases are documented here:

Case 1) A 1.5 kg Yorkshire Terrier with a chronic shoulder dislocation had her shoulder fused with the smallest size of SOP locking plate. The screws are only 2mm in diameter, but they look massive against the tiny bones of this minature patient. 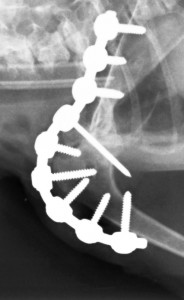 Case 2) A whippet owned by a client from a PDSA practice presented for treatment of a chronic shoulder dislocation. A locking plate was placed under a “fixed price” agreement which included all the radiographic follow up. She did very well and has excellent function. This photograph was taken a few months after the plate was placed, and the soft tissues have contracted around it giving it a “vacuum wrapped” appearance.  Removing the plate would be a simple job now that the joint has fused, but unless the plate causes problems in the future, we’ll leave it where it is. 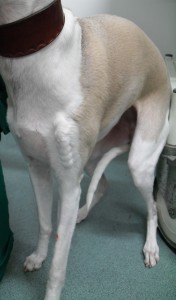 Case 3) A Dutch family, on holiday, in the UK began to doubt that their 5 year old Pointer had the simple shoulder sprain that they had been assured was present before they departed on their travels three weeks before. They were right! The shoulder was completely dislocated! The shoulder joint was fused in its normal standing position with a locking plate. An experienced surgeon in Holland was contacted by phone and email, and he kept an eye on the case once the owner had returned home. The shoulder united uneventfully and the dog enjoys very good limb function. 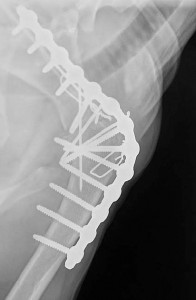 Case 4) A dog had a badly fractured shoulder joint. Repair of the fracture was considered to carry a very significant risk of complications like long term degenerative joint disease. Arthrodesis offered a good chance of relatively rapid return to function, and with a good prognosis. As usual, the shoulder joint was cut out by removing the joint surfaces with an oscillating saw. The photo shows the removed convex humeral and concave scapula joint surfaces at the top. Three of the fracture fragments that were removed separately are seen below. The dog recovered very well after surgery and had free exercise a couple of months later. 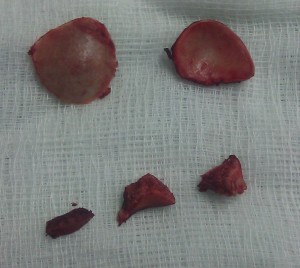 Case 5) A 13 year old terrier had a left medial luxation of the shoulder joint. She was only 3kg in weight. The shoulder was fused with two 2mm SOP locking plates 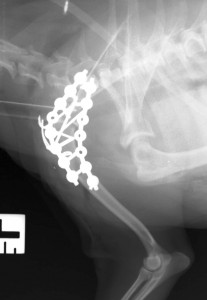 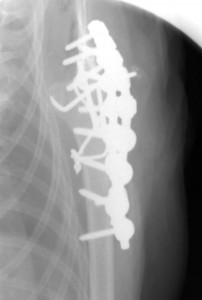