Correction of severe hind limb deformities in a young collie

A young collie presented to us with severe deformities of both hind limbs. Both tibias (shin bones) were massively twisted so that her hocks (equivalent to our ankles) and her stifles (equivalent to our knees) worked at right angles to each other instead of working in parallel alignment as they should do.

She was walking – if it could be called walking – on the side of her hocks. The boney prominences which should have been at the back of her ankles were twisted around to the inside, and the insides of her ankles which were coming into contact with the ground had developed large fluid-filled swellings as a response to the battering that they were taking.

We operated on the right hind limb to straighten it first, and once that was sorted we repeated the same procedure on the other side a few weeks later. We cut wedges of the appropriate angles out of both tibias at their point of curvature, creating fractures which were then stabilised with a pin in the middle of the bone and a plate applied to the side of it and held with screws.

Post-operatively she had to effectively learn to walk all over again, as her legs now worked in a very different way to that in which she had had to use them before. But once she got the hang of using her straightened legs, her mobility improved in leaps and bounds. 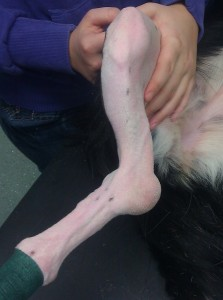 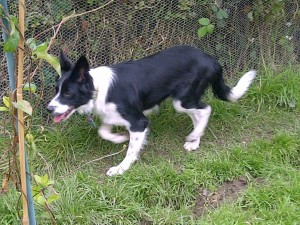