A four week old puppy, that was intended to grow up as a “ratter” on a farm, presented with a dislocated left elbow. In fact, strictly speaking, this elbow wasn’t “dislocated” as it had never in fact been “located” in the first place! The owners were counselled that there was little chance that this elbow could ever be returned to a functional joint.

They were urged to consider euthanasia. However they were very keen give surgery a try. The ulna, one of the two bones below the elbow, was cut and the ulna was accurately realigned with the humerus, the bone above the elbow. Care was taken to make sure that no soft tissue was trapped between them. These bones had never even been close to each other before and so they didn’t “fit” properly together. A pin was placed from the ulna into the humerus to temporarily maintain their relationship in the chosen position, and this pin was bent over a little. Another pin was used to repair the cut that had been made in the ulna. Two weeks later X-rays showed that the pin that crossed the joint had, rather surprisingly, remained firmly attached in the humerus as it grew. The pin was now being pulled through the ulna and across the elbow joint. The pin continued to cross the joint until, twenty days postoperatively, the elbow “broke free” from the immobilisation caused by the pinning. The leg was being used well and retrieval of the pin was not possible without risking serious damage to the joint, so it was decided to leave well alone.

A few weeks later, the owner was struggling to remember which leg had been operated on!  A year or so on, no forelimb lameness whatever was reported. The range of joint movement and the muscle mass on the operated leg were excellent. There was no grating and the function was extremely pleasing. The elbows were X-rayed for interest when the dog was anaesthetised for other reasons. The elbow looked delightful. The remarkable outcome of this case was in no small part due to the fact that the owners sought prompt advice when their pup was only 4 weeks old, and due to their commitment to attempt to find a surgical solution despite the poor prognosis. The bones were brought together while they were still very plastic, and able to mould to each other. 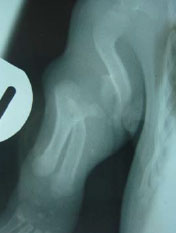 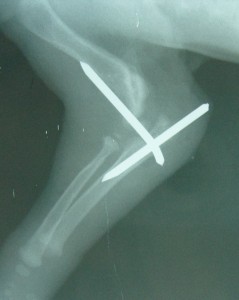 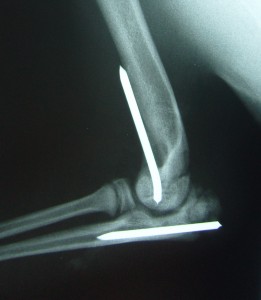