Dulcie, a 3 year-old female Dalmatian presented with a 5-month history of vomiting (daily) and weight loss. Roger, our medic and ultrasonographer, scanned her and found that the stomach was still dilated despite a 12-hour fast suggesting it wasn’t emptying properly into the duodenum (the section of small intestine that follow on from the stomach).

The area of the cranial duodenal flexure (the first part of the duodenum) was also abnormal. Roger couldn’t be sure at the time, but there did appear to be a hyperechoic fragment of foreign material within the wall at this point. The adjacent duodenal lymph node was also enlarged. And there was dilation of the common bile duct (the tube that lets bile drain from the liver into the intestine). This implied that there was obstruction of the bile ducts at the level of the papilla (the point where they enter the duodenum). Given the chronicity of the signs and involvement of the bile ducts, we weren’t optimistic. This is a busy place anatomically, with very important structures like bile ducts and pancreatic ducts (the ducts that drain digestive juices into the intestine from the pancreas). Damage to the bile ducts and pancreatic ducts would present major and life-threatening challenges. Although Dulcie was young, neoplasia (cancer) couldn’t be excluded as a possible cause of the signs at this stage.

Costs were an issue and referral on to tertiary soft tissue referral service was not an option.

So we took Dulcie to theatre. To even get at the area, first we had to remove a section of liver and omentum (membranes found in the abdomen which stick to anything that is diseased), which had adhered to the duodenum. Dulcie was deep chested and to improve access we extended the abdominal incision into an L shaped wound following the last rib on her right side. The mass could now be palpated, and its location was nothing short of scary.

We rang the owner (a veterinary nurse) intraoperatively. We reiterated the surgical risks Dulcie was facing and the owner understood that Dulcie’s life was most definitely at risk with at attempt at excision of this mass. The owner felt she was caught between a rock and a hard place and she asked us to go for it.

We managed to dissect the duodenal wall mass away, sparing the bile ducts and the pancreatic ducts. Removal of the section of the duodenal wall tended to narrow the duodenum at that point. So the pylorus/duodenal flexure was reconfigured to reduce the likelihood of a stricture forming post-operatively.

Dulcie recovered from surgery and stayed hospitalised with us. Roger rescanned her two days post-op and all looked well.

She went home four days post op for strict rest and control of the rate and volume of dietary intake. Histopathology on the excised tissue and the duodenal lymph node revealed the presence of plant material and bacteria within the excised duodenal wall, and chronic inflammation. Critically, there was no sign of neoplasia.

At the time of writing, nearly a week post-op, she is recovering well and there has been no vomiting at all since surgery. We are delighted with the progress so far … and not a little relieved, because as Andy commented in his own articulate way, “that’s either going to go very, very well or very, very badly!”

The owner kept us updated of progress and Dulci did great.

There is a copy of a letter they sent us at the end of this article, reproduced with the owners permission. It’s one of the nicest letters imaginable! 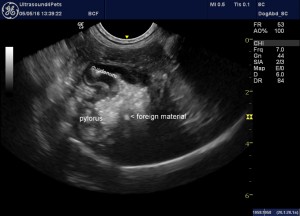 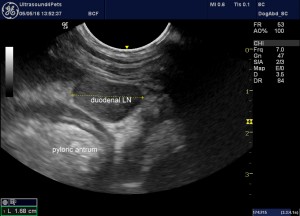 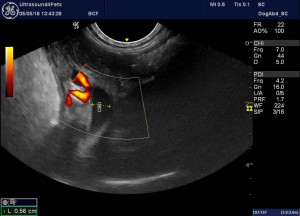 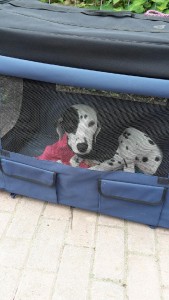