Gastric dilatation is a condition where the stomach rapidly bloats with gas. This often happens to big dogs and is thought to be predisposed by a lot of exercise around the time of large meals. Gastric dilatation creates problems for the dogs in breathing as the bloated stomach sits right under the diaphragm (the muscle separating the chest from the abdomen which is the main muscle involved in breathing).

Gastric dilatation can be complicated if the stomach twists creating a GDV (gastric dilatation and volvulus). This is a rapid killer. There are few conditions that are more acute emergencies than this.

This 10 year old Weimeraner, Marley, had recently presented to its own vets for gastric dilatation. This was successfully treated by them. Options for treatment of gastric dilatation without volvulus include passing a stomach tube. GDV always requires surgery if the dogs are to have a fighting chance, as the stomach needs derotating.

Once dilatation has happened once, it can easily happen again in the future; so Marley came to us for a prophylactic (preventative) gastropexy (creation of a permanent adhesion between the stomach and the body wall) to stop any future dilatation progressing into a GDV. We made a flap from a half thickness incision into his stomach wall, raising a flap of stomach wall muscle and passing it round a rib and then suturing the flap back into place. The so called “belt loop gastropexy”. The last rib in this dog was a pretty slim structure, but it still offers a firm anchor for the pexy, and the fibrosis (scar tissue) that will form will weld the stomach wall firmly to the body wall. So that stomach won’t be twisting anywhere in future! 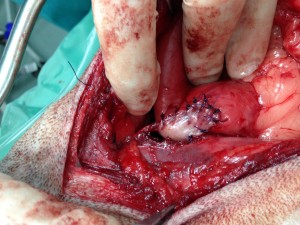