Tracheostomy makes for a happy dog!

Willow had upper respiratory breathing problems relating to her larynx. A tie back procedure was un-successful and her breathing was becoming distressed.

So we performed a tracheostomy procedure to allow her to breathe through a stoma (hole) in her neck, by-passing the larynx. Some saggy flaps of skin were resected from either side of the neck to stop them flopping over when she slept and inadvertently blocking the stoma. We used socks on her back feet to stop her clawing at the wound in the early post-op period. Once the stoma had had a couple of weeks to mature, it was an easy matter to keep hair clipped from around the hole. This is best done with two people, one to gently hold the head up, and the other to use a quiet pair of clippers (eg from Boots or Argos) and a vacuum cleaner on a very low setting to draw the clippings away from the stoma. 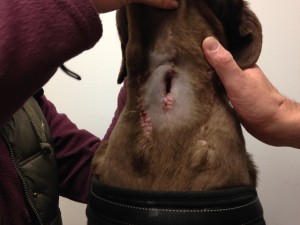 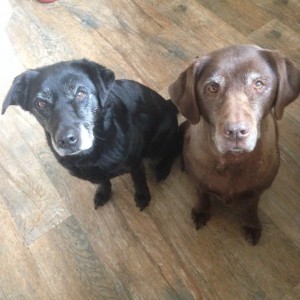