Mass found by chance at routine check up, and removed from caudal abdomen of dog

A vigilant local vet found a large mass in the caudal abdomen of a bull terrier called Nathan at a routine examination.

This was totally unexpected by the owner as no signs had been seen. Roger saw Nathan for an ultrasound scan and samples were taken from the mass suggesting that it was a malignant tumour called a carcinoma. It was in the region of the sub-lumbar lymph nodes and we were concerned that it might be a secondary mass. It had close relations with major blood vessels. Roger looked hard for a “primary” – the anal glands are the usual suspects for primary carcinomas leading to secondary masses in the caudal abdomen. He checked the bladder and the prostate and the rest of the abdomen and the chest too. But no primary was located. The size and position of the mass meant that it was soon likely to be causing serious and life-threatening problems – an inability to defaecate – this was likely to be within months and is the usual reason for these case being euthanased.

So the owner had a hard choice to make – surgery on a dog that was apparently currently healthy with the very real risk of serious hand life-threatening hemorrhage complications on the operating table, or leave things as they were and accept that their pet’s life expectancy was now likely to be measured in months.

They went for surgery. The surgery was tricky and required repair of one of the major internal veins – the right external iliac vein – but all went well and Nathan recovered uneventfully.

Follow up chemotherapy might be considered, but this needs to be pondered carefully as there are young children in the house.

Follow up scans and possibly CT might well be contemplated to look for regrowth. The likely time for any regrowth is uncertain, but a couple of years might be a reasonable guess. Two years is a long time when you’re a dog! 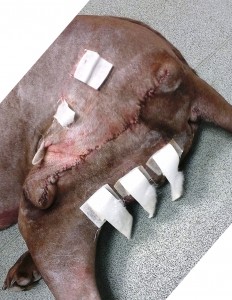 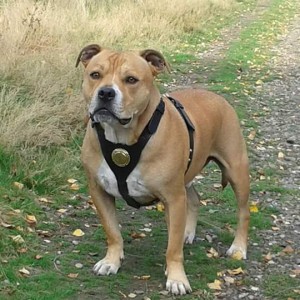 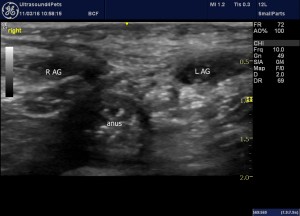 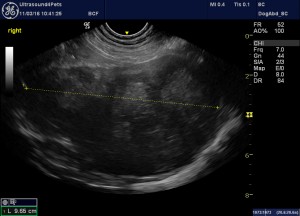 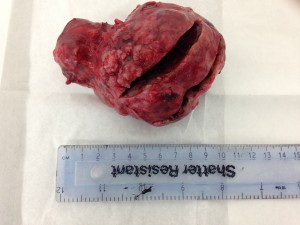