Spaniel “kebabed” on a metal spike and treated with a feeding tube, a drain and good nursing!

“Dave” the spaniel, a working dog, was out doing his thing one Sunday and charged through a hedge. There was a 2 foot rusty metal spike in the undergrowth and he impaled himself on it …

If you’ve ever seen Braveheart, it must have been a bit like that English cavalry charge against the Scottish wooden spikes…

The spike went in through his left neck, missed the big blood vessels and trachea (wind pipe) but caught the oesophagus. It crossed the neck, somehow missing the nerves to the right forelimb, and went between the right shoulder and the rib cage before exiting the right side behind the forelimb.

So what would you do if that was you? Faint? Scream? Stagger?

Dave ran back to his owner! They carried him best part of a mile back to a vehicle and called Steve, the on-call vet for McMurtry and Harding in Ashbourne. Steve got Dave anaesthetised and assessed the damage to the chest and the oesophagus.

He then phoned Jon who was the WMR duty vet. Jon jumped in the van and high-tailed it over to Ashbourne to lend a hand.

We placed a feeding tube in the stomach to allow food to be given straight into the stomach, bypassing the injured oesophagus while it healed. We improvised a drain from many lengths of nylon suture and these were pulled through the wound as the spike was removed, to allow the inevitable contamination (soil, rust, vegetation … ) to work its way out.

Dave stayed hospitalised for a couple of weeks at McMurtry and Harding. The drain was removed after a week or two, the oesophagus was scoped two weeks later and food was reintroduced before the feeding tube was removed.

Jon called in to see him part way through his hospitalisation, and was pretty stunned to see Dave walking around as if nothing had happened. He had clearly become a firm favourite with the nursing team there who were looking after him really well.

He has made a complete recovery.

What a remarkable dog. 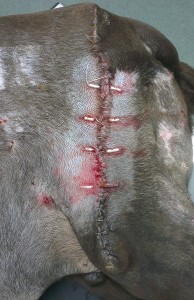 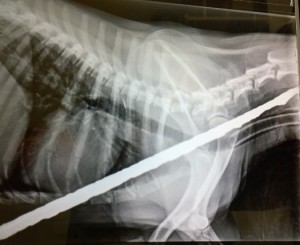 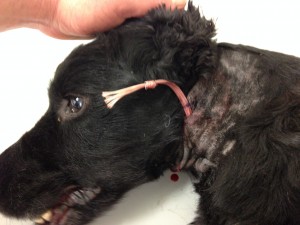 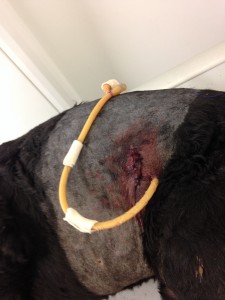 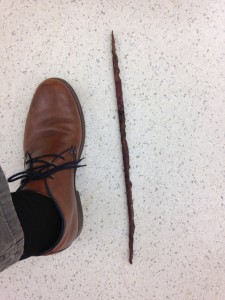