Princess, a 2 year old Yorkshire terrier was referred with a history of bladder stones and hepatic encephalopathy (neurological signs) attributable to the effect on the brain of toxins that the liver should have “scrubbed” out of the “dirty” blood coming from the intestines. An abnormal blood vessel called a shunt underlay the formation of the bladder stones and the shunt allowed toxins to get to the brain.

In normal animals,  “dirty” blood from the intestines is first routed to the liver through a vein called the hepatic portal vein. The liver cells then clean up the blood, before it is allowed to enter the general systemic circulation. Porto-systemic shunts are one or more abnormal blood vessels that allow the venous blood draining from the intestines to pass directly into the general circulation, bypassing the liver. Organs like the brain are adversely affected by this “dirty” blood, which contains toxins like ammonia. Often dogs present with hepatic encephalopathy (signs of brain dysfunction secondary to abnormal liver function). These signs can be lethargy, seizures, circling, aimless wandering, head pressing, drooling). Urate bladder stones can develop in conjunction with shunts, and these can lead to obstruction of urinary outflow or cystitis.

Shunts are sub-classified as congenital or acquired. 80% of cases are congenital shunts (animals are born with shunting though signs may not develop for a year or two). The shunting vessel is usually a single vessel though multiple ones can occur. In small breed dogs, congenital shunts are usually extra-hepatic (outside the substance of the liver) and they usually link the portal vein to the vena cava (the main blood vessel running through the abdomen and draining the rear half of the animal), or the azygos vein (a smaller but nevertheless major vein running in the dorsal abdomen close to the aorta. In large breed dogs congenital shunts are usually intra-hepatic (inside the substance of the liver). 20% of cases are acquired shunts where numerous abnormal vessels develop, usually because of liver disease. These acquired cases can’t be treated surgically.

Acquired shunts need medical treatment and/or a medical referral. Intra-hepatic shunts require a specialist surgical service and this is a surgical procedure that we can’t offer at the current time. The shunts that can be suitable for referral to us at West Midlands Referrals are the extra-hepatic congenital shunts, so when shunting is suspected, we generally limit the referrals we accept to young, small breed dogs.

So this young Yorkie fitted the profile of cases that we’d take on. The history fitted. Furthermore the signs had responded pretty well to standard medical management for shunts (antibiotics, lactulose, low protein diet). A bile acid stimulation test suggested that the liver was not scrubbing the blood clean as it should following the ingestion of a meal.

A medical colleague conducted an ultrasound examination using Doppler colour flow to  indicate flow and areas of turbulence in the major blood vessels. The lack of turbulence in the vena cava, turbulent flow in the Azygos vein and the small hepatic portal vein were all indicative of a portazygos shunt.

Anaesthesia was induced, and we were mindful that small dogs lose body heat fast and “shunt dogs” don’t process anaesthetic drugs as efficiently as normal dogs so doses were down-sized accordingly. After opening the abdomen we cannulated a vein in the intestines and injected a contrast agent which showed that the intestinal veins were draining straight into the azygos vein and not to the liver as they should do.

We located the shunt with some difficulty, dorsal (high) and cranial (forwards)  in the abdominal cavity, right against the diaphragm. During the dissection of the shunt, a small tear developed in the diaphragm. This was not a major problem but the RVN running the anaesthetic needed to ventilate the patient and closely monitored readings of heart rate, blood oxygen concentration and expired CO2 levels to ensure that effective gas exchange across the lungs was still occurring.

A device called an ameroid constrictor was placed around the shunt and will slowly close it off in the days/weeks following surgery. The body wall was closed with sutures, and the lungs were reinflated using a needle to evacuate the air that had been trapped around them intra-operatively. Once the lungs were reinflated there was no need to ventilate the patient. Finally, before recovery from anaesthetic, Princess was held in a vertical position and her bladder was gently squeezed. Urine came out with hundreds of tiny urate crystals.

She recovered very well from anaesthetic, ate food and went home within 24 hours. The ameroid constrictor will take a few weeks to squeeze off the shunt. The aim of the delay is to allow time for the circulation in the intestines and in the liver to adapt. Medical treatment for the shunt will continue in the interim. We will repeat the bile acid stimulation test in a  few weeks to check that the ameroid constrictor has worked its magic.

The future should be bright for Princess. It is hoped that in a few weeks there will be no more need for medical treatment, and she will have an ordinary life.

Ordinary? No! She is emigrating to South Africa with her owners in a few months, the lucky devil … 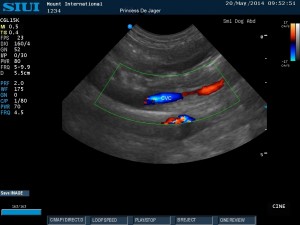 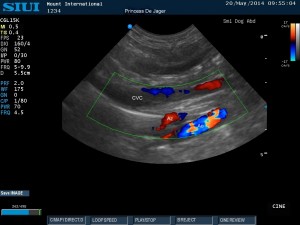 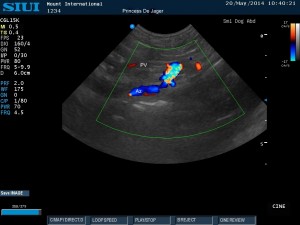