Endoscopic removal of apple foreign bodies from the oesophagus

One Friday afternoon, a general practice some miles away had a problem:

One of their clients’ dogs had eaten an apple, part of which was now stuck half way down the oesophagus around the level of the heart. They had anaesthetised the dog, and they could see the apple on X-ray, and they could even see it with their endoscope. But try as they might, they couldn’t push it on into the stomach and they couldn’t grab hold of it to pull it back. They rang us for assistance.

They recovered the dog from anaesthetic to a level of sedation and then one of their vets and nurses brought the patient over to us. We re-anaesthetised the dog and we were able to use our large endoscope and a pair of purpose-made forceps to grab the piece of the apple and pull it back to the level of the larynx. It proved difficult to pull the apple back any further, so it was held in position in the upper oesophagus with gentle pressure applied across skin of the upper neck with fingers, while it was broken into smaller pieces that were then easier to get out via the mouth.

Our colleagues took the patient for aftercare after recovery from general anaesthetic had been completed and they reported that the convalescence was uneventful.

The same thing happened again recently on a Friday evening with another practice! A vet and a nurse brought a Staffy over that had half a large apple lodge in its oesophagus. After an hour or so of trying to grab the hard part of the apple and nibbling away at the softer edges, we finally got a decent purchase on it with the forceps and managed to pull it up into the upper oesophagus where it was further broken down and manipulated it out of the mouth. 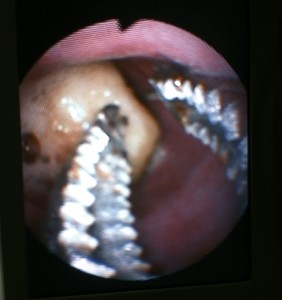 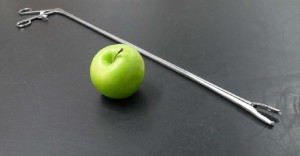 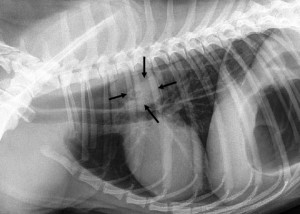