Colectomy for treating megacolon and constipation in cats

Cats can have great difficulty passing faeces through a narrowed pelvis, which can result from pelvic fractures that are left to heal naturally after trauma from road traffic accidents etc.

This can lead to chronic and progressive constipation months and even years after the trauma. A build up of faeces in the colon – the large bowel – occurs. The colon stores faeces and resorbs water from it, so the faecal accumulation becomes drier and drier, and harder and harder. Once the colon has been stretched beyond certain limits, it loses its ability to recover contractile function and the constipation is irreversible. The options are then either regular enemas – expensive and not without risk – or colectomy (surgical removal of most of the large bowel).

A large section of the large bowel is cut away and the remaining ends are sutured together to recreate the tubular integrity of the gut. Colectomy is usually performed in a way that saves the junction between the small intestine and the large intestine.This makes it much less likely that incontinence of sloppy faeces will be an issue post-operatively. Colectomy is a serious piece of surgery and we always warn owners that there is a small, but significant, risk of peri-operative death. If the repair of the gut fails, then life-threatening peritonitis (inflammation and infection of the body cavity) results. 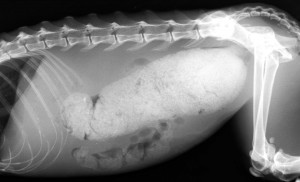 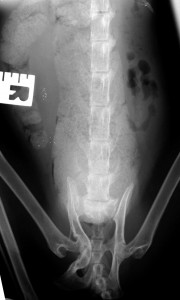 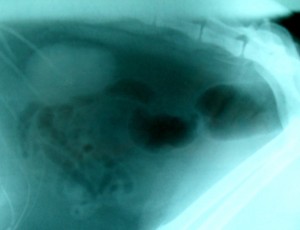