Ben, an elderly male dog initially presented with partial obstruction of the larynx caused by paralysis of the vocal folds that caused stress related collapse and exercise intolerance. The problem was initially addressed with a “tie back” surgical procedure (see separate article in this section, and our post operative care sheet for tie-backs in the section for owners).

This tie back procedure initially helped improve the presenting signs, but unfortunately the benefits were short lived and the patient’s natural exuberance may have contributed to the failure of the tie back procedure.

So we salvaged the situation with a tracheostomy.  This involved creating a permanent stoma (“hole”) in the trachea (“wind pipe”) just below the larynx (“voice box”). Breathing could now be partly or completely via this hole,  although the larynx/nose/mouth route for airflow was left intact.

Ben’s activity levels are now “back to how they were years and years ago when he was young”. We see him every few weeks to carefully trim around the stoma to keep it clear of hair as a favour for the owner. It is important that no hair clippings are allowed to get into the stoma.

He only very rarely went swimming anyway before surgery, but swimming is unfortunately the one thing he can’t ever do now, as this would almost certainly prove fatal with water entering the stoma and causing drowning. 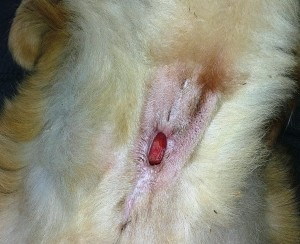 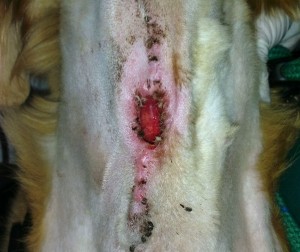 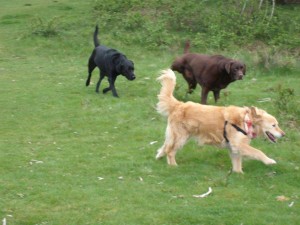