Soft tissue sarcoma of the tail

A 12 year female Border Collie presented with a massive (>2kg) soft tissue mass over the right rump. This was believed to be a soft tissue sarcoma and had grown over a couple of years. It was removed with reductive intent rather than curative intent.

Histopathology reported it as:  Intermediate grade soft tissue sarcoma. Deep invasion into the muscle is not noted, though tumour extended to the tissue margins as expected.

Regrowth is expected, but we’ve bought her some time. 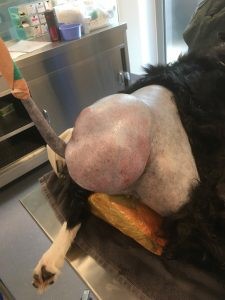 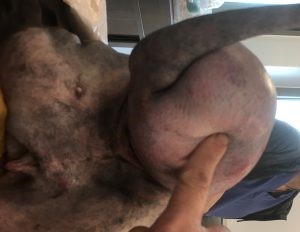 After excision, it’s a question of putting the skin back together in the most cosmetic and tension free way.