Thyroid carcinoma in a dog

A 45 kg, 10-year-old cross bred dog presented for CT chest/neck and surgical removal of an apparently well-defined mass between the left carotid artery and the trachea. Our colleague Mayra had recently scanned him.

A CT scan of the chest was unremarkable. The mass was approached from ventrally and it was removed with narrow margins.

Histopathology identified it as a thyroid carcinoma and parathyroid adenoma. Thyroid carcinomas occur more often than adenomas in dogs, whereas the reverse is true in cats. Carcinomas can invade locally into the wall of the trachea, cervical muscles, oesophagus, larynx, nerves and vessels. Invasion into branches of the cranial and caudal thyroid veins is reported to occur early in the progression of this neoplasia, and this is believed to result in multiple pulmonary metastases often before involvement of the more local lymph nodes in the neck. Parathyroid adenomas usually are slow growing and can be surgically excised without difficulty.

A year on, no regrowth has been noted and the owner reports he is happy and active. 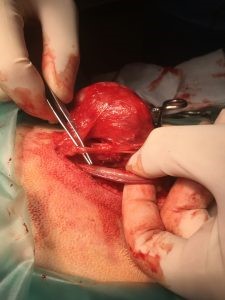 The tumour is incised after removal, to help formalin penetrate deep inside it, to better preserve it for the lab analysis.