Well, this makes a change from itchy dogs with allergies. The striking thing about Zak here is the distribution of lesions. The usual allergy/pyoderma/yeast case rarely have involvement of the outer aspect of the pinnae and extremities.

The detail of the lesions is also interesting - he has a fine ‘silvery’ crusting which is rather distinctive.

Alarm bells are now ringing. Has he been out of the country? Well now you come to mention it, yes -he was adopted in Crete and brought back to the UK a number of years ago. And on closer examination all his peripheral lymph nodes are a bit on the large side.

So, he is a typical dog with Leishmania. The next problem is trying to clinch a diagnosis. Ideally, it’s nice to demonstrate the presence of the organism straight away and in Zak’s case we were able to see large numbers of Leishmania organisms on cytology of lymph node aspirates. At first glance the affected macrophages can almost look a bit like mast cells. On closer inspection the ‘granules’ in Leishmania are more irregular and less basophilic than real mast cell granules. Each one consists of an amastigote with a nucleus plus a smaller kinetoplast in tow. We subsequently sent one of these aspirates, suspended in saline, for PCR confirmation. Happily Zak’s haematology and biochemistry were otherwise OK.

These days the treatment of choice is usually oral miltefosine for a month along with long-term allopurinol. This avoids the frequent injections and possible adverse effects associated with the use of meglumine antimonate. Duration of allopurinol treatment depends on clinical staging and response to initial therapy.

At one month, Zak was slightly improved. At three months he is now almost normal. As well as the outward skin changes his owners also report that he is now full of beans -they hadn’t realised previously how poorly he had been. 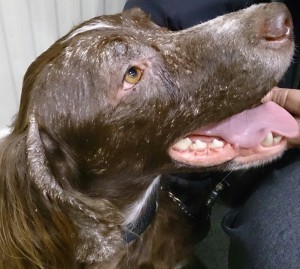 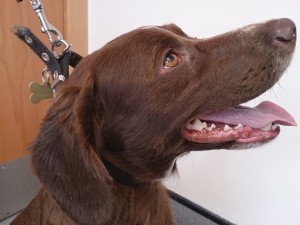