Distraction fusion of cervical vertebrae for wobbler syndrome in a Doberman

Flynn, a 5-year-old male Doberman was seen by us a year ago with modest ataxia (wobbliness) affecting his hind limbs. It was thought that given his breed, this was very likely to be “wobbler syndrome” relating to cervical (neck) vertebral canal issues.

Flynn was a fairly “enthusiastic” dog: he was about 43kg and quite a handful! As his signs were mild, we felt that a conservative approach, avoiding surgery, was wisest, at least initially.

All went well for some months. Then there was some progression of signs and the owners felt that they really had to do something. If surgery was to be performed, it made sense to get it done while he was still very much able to walk, rather than trying to manage a big enthusiastic dog as a recumbent patient.

Under general anaesthetic, a myelogram was performed. This involved injecting a contrast agent into the fluid space that surrounds the spinal cord. This makes that fluid look whiter than normal on x-rays. The myelogram showed that there was a compression predominantly ventral to (underneath) the spinal cord at the level of the 6th and 7th cervical (neck) vertebrae (C6 and C7). Initially we tried a simple ventral slot (see separate article), approaching the compressed area from underneath, moving the oesophagus, trachea and major neurovascular bundles to one side, and using a high speed compressed air-driven bur to remove bone and disc material to create a slot on the midline by removing bone and disc material. However, as we got to the level of the cord bleeding from venous sinuses beneath the spinal cord became an issue as is sometimes the case with these surgeries. Much of the disc material had been removed, but once blood loss was becoming significant (as measured by the volume aspirated using suction intra-operatively) a decision was made to abandon the surgery before a transfusion became required. We decided to see how Flynn recovered from surgery and to see if we had done enough.

Although he was back on his feet within a few hours, a few days later his ataxia was still no better and probably worse than pre-operatively. So, we decided to consider distracting the C6-7 region with plates and screws.

We saw Flynn back and blood tests were carried out to check that his level of blood cells was still “in the green” and that his clotting times were normal. Once back under general anaesthetic, the myelogram was repeated, and the ventral compression was still present. The compression was “distraction responsive” which meant that the compression could be seen to reduce if traction was applied to the neck. The surgical site was re-opened, and a distraction tool was placed which allowed the C6-C7 intervertebral space to be temporarily “stretched” while locking screws and plates were applied. We used 2 plates, one placed on each side of the slot. The advantage of locking plates was firstly that the screws were stronger than screws of the same size of conventional design, and secondly that the screws didn’t need to penetrate so deeply to have good purchase. This later point was important because the drill and the screw tips needed to be kept away from the vulnerable spinal cord. The slot was partly cleared out of the clot that had formed in the intervening days, though the depths were left undisturbed to avoid risk of restarting haemorrhage. The slot was partly filled with bone graft. This was a mixture of Flynn’s own bone, removed through a small hole from a convenient site (a nearby humerus, just below the shoulder) and commercially available cancellous bone chips. The remainder of the bone graft was left below the vertebrae. The wound was closed.

The intention was that the C6 and C7 vertebrae would fuse into one solid piece of bone over the coming weeks.

Flynn recovered well from anaesthetic and was rapidly back on his feet. The owner is keeping us up to date, and Flynn is currently convalescing well at home. With the slot in his vertebrae and holes for 7 screws there too, there is the risk of vertebral fracture until the bone has had a chance to remodel. So, keeping him as calm as possible for the convalescent period is important.

In the weeks following surgery Flynn made steady progress and his coordination improved. He will stay on a lead until x-rays 2-3 months post-op. 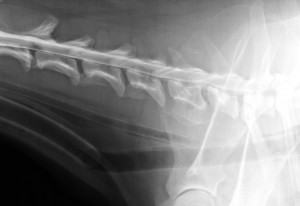 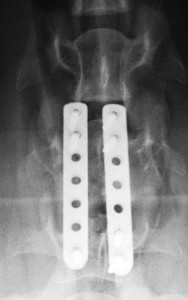 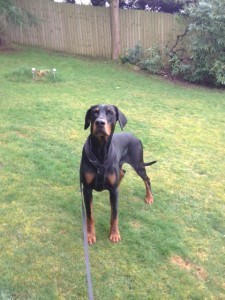