We have successfully operated on a Cocker Spaniel’s gruesomely fractured leg, due to an injury described as ‘memorably horrible’.

Jon Mills, clinical director here at West Midlands Referrals (WMR), said he had to plate, wire, screw and pin the 10-year-old dog’s shattered humerus back together in an intricate procedure. 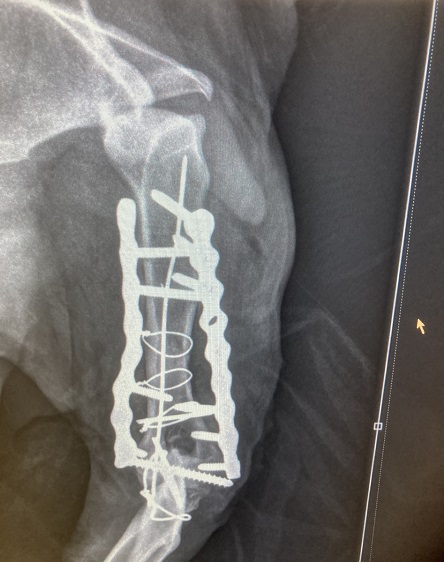 Incredibly, the much-loved family pet, called Fraser, is expected to make a full recovery from his traumatic and dramatic injuries, which were amazingly caused when he leapt to catch a ball in the park.

Jon revealed: “Fraser had a right Y fracture of the humerus and, although Y fractures are common, this one was memorably horrible.

“The fracture configuration was truly shocking, with splits extending high up the leg and with major disruption to the elbow joint.

“Surgery was challenging and needed screws, pins, wire and locking plates to repair and reconstruct the bone successfully.

“Fraser’s Y fracture was fixed with a 4.5mm transcondylar screw, three cerclage wires and a transverse pin and a medial long pin. 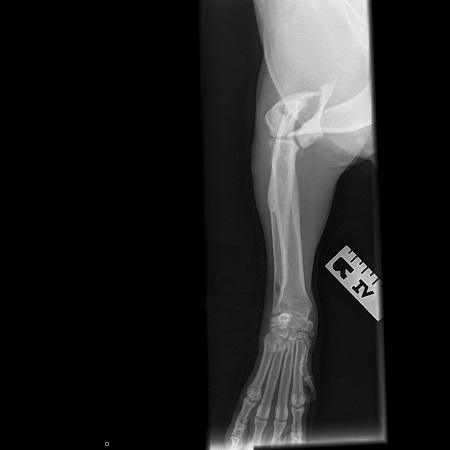 “An olecranon osteotomy was fixed with two pins and a tension wire.

“We also had to cut the ulna (lower bone in forelimb) to accurately reduce the elbow, and once that was done, we had to fix the elbow fracture that we'd just created.

“It was extensive surgery and we recommended a couple of months of rest, to allow the wounds to heal, followed by a course of hydrotherapy as a key part of Fraser’s rehabilitation programme.”

Relieved owners Anna and Shaun Harvey, from Eastwood, Nottinghamshire, admitted it was an anxious time but are full of praise for the expert care their precious pet had received at WMR.

Anna explained: “Fraser was with Shaun in the park and jumped to catch a ball but unfortunately landed awkwardly and then fell tumbling down an embankment.

“He was lying there yelping in pain and Shaun was quite distressed when he rang to ask me to pick them up from the park.

“Fraser was obviously in a bad way and we took him to our local vets who took x-rays. When we saw them, we could tell it was a bad.

“The vet said it was a terrible break and Fraser needed to be referred for expert care and he recommended WMR in Burton.

“It’s a 45-minute drive but a journey you don’t even think about when your pet is in so much trouble.

“Jon and the team at WMR were brilliant and didn’t waste a moment in starting work on Fraser.

“Afterwards, they showed us the images of all the plates and screws they used to put the bone back together.

“It was amazing, like something you see on one of those vet shows on TV. So much metal in there keeping his bone together – we really did have a bionic dog!

“Fraser’s recovering well despite being an older dog. He’s just had his post-op check-up and WMR are happy with the way everything is healing. 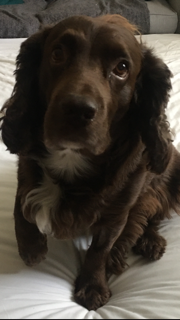 “It looks like he’ll be ready to start his rehabilitation programme pretty soon now.”