Rusty, a Staffordshire Bull Terrier presented to us “off his back legs”, with total loss of sensation of his hind feet. An intervertebral disc had ruptured in his spine.

The extruded disc material and the associated inflammation and haemorrhage had compressed his  spinal cord over the length of half a dozen vertebrae. Signs had progressed over a few days. When we saw him, even if we squeezed the toes of his hind feet aggressively with instruments, he was utterly oblivious of what we were doing to him. Such cases are described as “deep pain negative”. This total loss of sensation had occurred sometime over the preceding 24 hours.

Spinal surgery is always an emotional time for owners and we always warn owners that they need to be ready for several weeks of turmoil with no guarantee of outcome. They need to brace themselves for alot of worry, heart ache and soul searching along the way. In Rusty’s case we went a step further and advised the owners to consider euthanasia because:

* The clinical signs relating to his injury categorised it in the worst of the five categories into which we grade these injuries.

* The chances of Rusty walking again were only 50:50 even with proper diligent aftercare. Even if he walked again, it was very likely that he would still have compromised mobility with a “drunken” style of walking. We advised the owners that we would view any intervention as a “success” if Rusty became continent, comfortable, and capable of walking, even if he did not re-achieve a normal level of nerve and muscle function. The owner needed to be sure that they would view this as “success” too.

* The expense of the investigation, surgery and the early aftercare would be significant, even with our fixed price of £1500. Our fixed price for this surgery would include all consultations and rechecks with us, myelography and surgery, and all drugs, drips, hospitalisation and intensive nursing for the first 2-3 days post-op. It was likely that this case would need prolonged on-going hospitalisation, not least to ensure that the bladder was emptied regularly. In the early stages of recovery, it would be essential for urine to be removed from the bladder at regular intervals to prevent permanent serious damage befalling the bladder. As the after care might go on for weeks, the cost of on-going hospitalisation could really mount up whether the hospitalisation was done by us or by the referring practice.

* Rusty was not a small dog, weighing about 20 kg, and so the assisted lifting, nursing and physiotherapy that he would require during his convalescence would be a physical as well as a psychological burden on the owners.

* From outset they would need to accept the very real possibility that despite everybody’s best efforts, euthanasia in  a few weeks might be unavoidable unless sufficient functional recovery was made.

The prognosis for spinal injuries/spinal surgery is always a “percentage thing”; a percentage of cases do well and a percentage don’t. The worse the starting point, the poorer the prognosis. Rusty’s owners didn’t have much time to think – if we were going to operate, we needed a decision promptly. They thought quickly and came to a unanimous family decision – they decided to go for it.

A myelogram was performed with an injection of an X-ray contrast solution into the cerebrospinal fluid that surrounds the central nervous system. This solution showed up on X-ray and allowed us to identify the location and the extent of the compression. We proceeded to surgery, using an air-driven bur to open a long “window” in the bone of the spinal column over the affected area to relieve the compression. The extruded disc material and associated haemorrhage was removed with the aid of gentle suction.

The day after surgery, Rusty had regained sensation in his feet and a few days later this could be demonstrated with a pinch applied with our fingers rather than by using instruments. This was very encouraging progress. Rusty rapidly became a firm favorite with all the staff. He was a very amenable and compliant dog who was very easy to nurse, and he had a “can-do” attitude. If ever a dog was a “trier”, it was this one.

Because Rusty was a male and because he was so nice-natured, it was easy for us to train the owner to catheterise his bladder on a regular basis at home, and to do assisted lifts and exercises to encourage the re-establishment of sensation and control of the hind limbs. This meant that they could really keep their aftercare costs down.

Next to return neurologically was voluntary movement of his tail and his back legs. Three or four weeks after surgery, Rusty could stand and take a few “drunken” steps. His recovery was going very well indeed and we expected further improvements week on week and month on month.

Four months post-op, we received this lovely email from the owner:

“Rusty’s owner here. Just wanted to let you know how well he is doing. He is as happy as Larry, enjoying life and walking very well, albeit a bit drunkenly! We cannot thank you enough for everything you have done for Rusty – he truly is a miracle dog, and I am sure that he is glad we didn’t have him put down. We got there in the end, he loves his life and loves us. He is constantly wagging his tail and still trying to run before he can walk! He loves playing with his ball and of course he is spoilt rotten. You guys are fantastic and we will be forever in your debt for helping our special little friend get back on his feet
Thanks again, Donna”

A year on, the owner sent this:

“Hi Jon. Hope you and the team are keeping well. Just thought I would update you on Rusty, the Bull Terrier you operated on around a year ago after his back legs went.

Well he is doing brilliantly – he is now jumping and running, and possibly the happiest dog in the world. We have another dog, Smudge, and they play wonderfully together. There are no restrictions on Rusty what so ever. If he wants to scamper after his bone, he does it, and very often beats Smudge to it!

I never thought that one day Rusty would have his full mobility back. The whole family are so very thankful to you all at WM Referrals for your work on our lovely special boy.

Thank you again for all your brilliant work ! Kind regards, Donna”

We are very glad that the Rusty got this great result.  With hind sight, the doom and gloom that we gave the owners as a prognosis when Rusty first presented seems to have been over the top. However many dogs with Rusty’s severity of presentation would not have achieved anything like this level of functional recovery. We are delighted that our pessimism at the outset was proved to be so wrong in this case! The great result is in no small part due to the diligence of the owner in the aftercare and rehabilitation, and in their clarity of thought and decision making at the time of first presentation. There was no dithering; they heard the grim prognosis but they were absolutely sure that they wanted surgery and they just “went for it”. 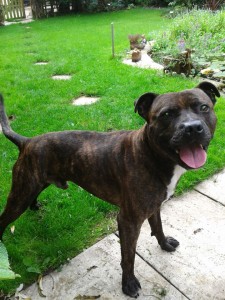 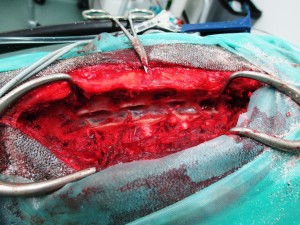