Eric, a lively Staffie, had a pericardial effusion (fluid accumulation around his heart within the confines of his pericardial sac).

The pericardium is the tough fibrous non-distensible sac that envelopes the heart. Pericardial effusion has serious consequences for the heart that gets squeezed into  a smaller space than usual so it can’t then pump as efficiently. This was the most likely cause of the ascites (abdominal cavity fluid accumulation) that was also present. The pericardial effusion was drained by a needle under ultrasound guidance, but it reformed. Diligent scanning by Roger failed to locate a source. When no cause of the effusion can be identified, the cases are described as “idiopathic”. Pericardial effusion often results from neoplastic (cancerous) causes. In Eric’s case, even though the case seemed to be idiopathic, a small possibility of an unidentified underlying neoplasia remains.

We removed a large part of the pericardium through an open chest surgery (thoracotomy), to take the tamponade (“squeeze”) off the heart.

Eric recovered very well from the surgery, but remained under our care for a few days while the chest drain was used to clear decreasing volumes of fluid from the chest, and while the ascites gradually reduced. Eric’s weight dropped from 18kg to around 16kg as the substantial volumes of fluid ebbed away, despite the fact that he was eating like a horse!

“Eric is much happier. Thanks again for everything. We just can’t thank you enough!” 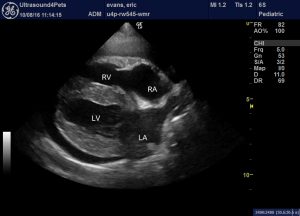 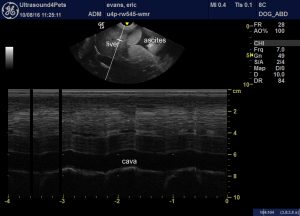 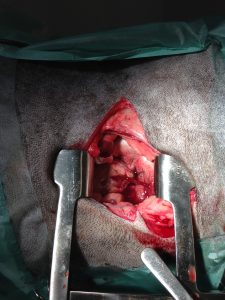