Pyometra occurs relatively commonly in bitches, and involves the combination of infection in the uterus (womb) and progesterone hormone dominance from the ovaries.

It can be thought of as the female’s body treating the infection in the uterus rather like a pregnancy and maintaining it with high levels of progesterone. The situation won’t resolve until the progesterone dominance is removed and this generally means removing the ovaries, along with the uterus as an ovariohysterectomy (“spay”). Medical treatments for the condition are described using prostaglandins but they are not a pleasant experience for the dog and we would always recommend ovariohysterectomy which rapidly solves the problem and avoids the risk of future recurrence.

Although these dogs are often dehydrated, septic and shocked to a greater or lesser extent, with careful anaesthetic management, intravenous fluids and prompt surgery the prognosis is excellent.

These cases are almost always treated by general practices but we see the occasional case, usually referred for logistical reasons if the home practice is swamped in other work or has temporary staffing issues and yet wants their clients’ pet treated promptly.

Poppy, the Cavalier bitch featured in photos below was actually diagnosed as having pyometra at another referral practice to which it was initially referred by its home practice for ultrasound investigation. It was then transferred to ourselves for surgery. Once the ovaries and the uterus were removed, we kept her in for a couple of days on fluids until she had urinated several times (so were were sure her kidney were flushing through) and until she was eating and taking antibiotics by mouth (so that we were sure that her owners could manage her at home). She was then discharged to her owners’ care and she is making an excellent recovery. 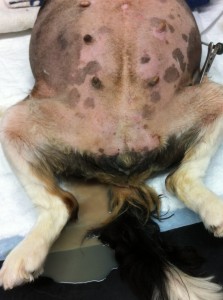 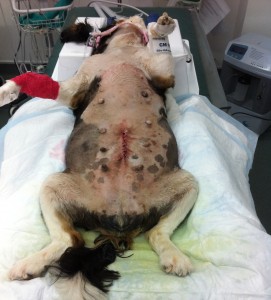 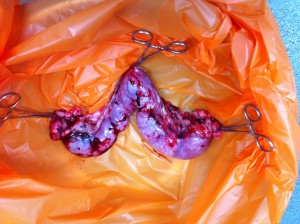