Interlocking nails are an innovation in fracture fixation that came from WWII, and they were a closely guarded military secret at that time because they got injured German pilots back into the air faster than ours!

A large pin with holes in it at set positions is inserted into the bone, and a jig is used to drill perpendicular holes at the specified points that will allow screws to lock into the holes in the pin, preventing rotation and shortening at the fracture site.

They are commonly used in human fracture fixation, but they aren’t cheap implants to buy or place, and so they have been less used in veterinary surgery. This cat had a horrendously shattered femur fracture that we fixed with an interlocking nail. 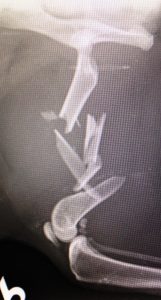 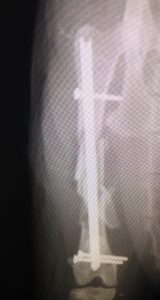