Fixed price surgery for a young dog with a broken back

Rosie, a 9 month old 7kg Cavalier pup broke her back playing in the garden. Her 5th lumber vertebra fractured and the 5th and 6th lumbar vertbrae dislocated. The resulting nerve root entrapment resulted in severe pain and hind limb paresis. She was seen by the PDSA who diagnosed the problem with xrays.

They contacted us and we said we could take her just as soon as the owner could get her to us. We asked them to drive slowly and carefully … the last thing a dog with a  broken back needs is rocking around. She was transferred to us late on Friday for surgery.

This all happened just as the Advent calendars were coming out. The 8 year old child in the family said that they didn’t want any presents for Christmas … they just wanted Santa to make Rosie better … yeah, that brings a lump in the throat doesn’t it?

She was really comfy post-op, and was able to stand with a bit of help. In fact, she was so comfortable the next day that we were able to discharge her to the owners’ care with medication. She will need the support of her family for her rehabilitation in the coming weeks but the prognosis is very good.

Where else could you get a spine fracture accepted as an immediate emergency referral and accurately fixed for £1500 “all-in” on a Friday evening and have the dog home on the the next day??!! Good old Santa …

Two weeks down the line, she was moving very well on the right hind limb. The left hind limb was still a little “knuckly” but it was getting there. She was peeing well on her own and she was very contented and comfortable. We planned to see her back in the new Year but it was all looking good.

Unfortunately the story had a sad ending; Rosie suffered another fracture, this time involving her femur, and the owners sadly decided to have her euthanased. 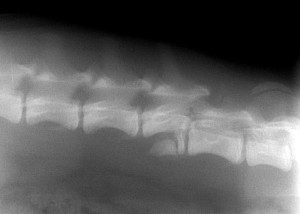 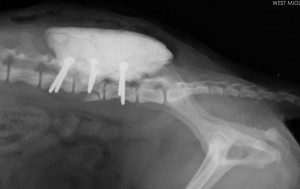 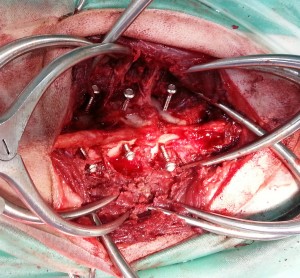 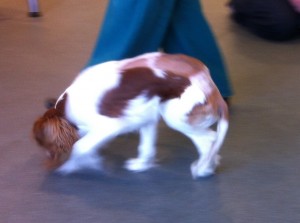