Gizmo presented to us suffering from an acute paralysis of the hind limbs. He was completely off his back legs and the referring vet suspected that one of the intervertebral discs, the soft tissue spacers that sit between the bones of the spinal column, had ruptured. One of our nurses recognised this dog and its owners. She had actually been at his birth (by caesarean) five years before in a previous employment!

A myelogram was performed. This involved injecting a liquid into the space around the spinal column which would show up on x-ray and indicate the level of any compression of the spinal cord.

Once we had identified the position of the spinal cord compression, the spinal column was opened up at that site with the help of a high speed bur. Disc material which had “exploded” from the intervertebral disc was removed to take the pressure off the spinal cord.

Gizmo remained in our care. Three days later he was at one of our homes for the weekend. He was walking by then, albeit still very wobbly. We thought everything was going very well. But, disappointingly, he then took a dramatic turn for the worse and became paralysed again.

One option was to repeat the myelogram but we considered that a second myelogram so soon after the first and so soon after surgery might carry increased risks for significant damage to the spinal cord. An MRI would have been ideal, but these are expensive. Experience suggested that the most likely explanation of the deterioration was that more disc material had extruded from the same ruptured intervertebral disc space. Reopening the surgical site at this early stage – before everything had had time to really “stick” back together – was likely to be technically easy and this course of action was considered to carry few risks, at least as a first step in investigating the deterioration.

On reopening the site more extruded disc material was obvious. This was removed and we were delighted to see Gizmo back on his feet and urinating on his own 2-3 days after that. He was then discharged to the owners’ care.  He went on to make a full recovery. Once he was recovered there were no restrictions on his activity. He didn’t need any encouragement to jump up as you can see in the photo. His tail tells its own tale! Jumping up like this would certainly not have been desirable soon after surgery, but it is not a problem if he does this now. 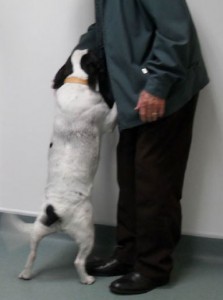