Zelda, an 8 year old Bull Terrier presented with a history of sneezing, bleeding from her right nostril, and the owner had seen pieces of what she took to be bits of body tissue sneezed out.

Common causes of nasal bleeding are tumours in the nose, fungal infections, foreign bodies (like grass seeds) and bleeding disorders.

Radiographs were taken of the skull which showed no destruction of the fine bone structure of the nose (which often but not always accompanies fungal infection or cancerous lesions). A fibreoptic endoscope was used to examine the back of the nose cavity. Small biopsy samples were collected and submitted to a pathologist. These showed no evidence for fungal infection of cancer. The samples indicated the presence of an inflammatory polyp and a chronic active rhintis (inflammation of the tissue of the nasal cavity).

A hinged bone flap like a trap-door was created in bone overlying the right nose. This allowed large quantities of the polyp and inflamed nose tissue to be removed. The flap was then sutured back in place and the skin was closed over the top of the flap. The cosmetic result was very pleasing and the wound was almost invisible.

Further lab investigation of the substantial tissue samples now available for examination confirmed the presence of inflammatory polyp, but again showed no clear evidence of cancer or fungal infection. A low grade chondrosarcoma – a tumour of cartilage cells – could not be ruled out.

The signs of sneezing and bleeding resolved rapidly after the surgery and we had no current plans to see Zelda back. Some discharge did recur a few weeks after surgery, and this has so far been managed by the referring practice with steroids. 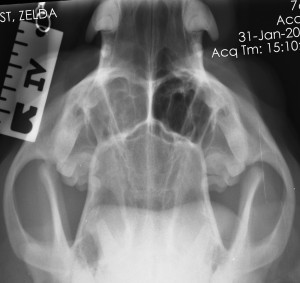